30th September . He wrote to Cathal Brugha “... ah Cathal , the pain of Easter Week is probably dead at last.... God bless you again and again and God give you and yours long years of happiness under the victorious Republic”.
As his health deteriorated usually present were his wife Muriel, his sisters Annie and Mary, his brother Sean his Chaplain Fr. Dominic O.F.M Capuchin –to share bedside vigils. Dr Coholan, Bishop of Cork also visited as well as Bishop Mannix of Melbourne among others.
25th October Terence Mac Swiney dies, age 41, following his 74 day fast.
His body is removed to Southwark Cathedral where over thirty thousand people visit to pay their respects.
His body is returned by mail-boat direct to Cork under military escort to avoid possible demonstrations in Dublin. Following Mass at the North Cathedral and funeral attended by huge crowds in Cork City Terence MacSwiney is buried in the Republican plot at St. Finbarr’s Cemetery, Cork - alongside his comrade Tomas Mac Curtain

Notes;
Note, Sean O’Hegarty referred to (at 1901 and 1913) is buried in the old graveyard in Kilmurry.
Daniel Corkerry writing to Mary Mac Swiney a few days after Terence MacSwiney’s death “ ...I know how much he loved Mid-cork, every hill of it, and its fine people, and know quite well that certain of its features would recur to his memory with terrible intensity”.
Bishop Coholan in a letter to the Cork Examiner Newspaper wrote “ Periodically, the memory of the martyr’s death will remind a young generation of the fundamental question of the freedom of Ireland”.
Petit Journal , Paris said “The death of the Lord Mayor of Cork has interested the whole of humanity in the cause of Irish Independence.
Prof. Liam O’Brien then in Paris says “that Europe was ringing with MacSwiney’s name”.
Corriere d’Italia “ his wish has been to sacrifice his life for (his country) in testimony to his faith – and the same sacrifice may well be the equivalent for England as a crushing defeat”.


Terence Mac Swiney writings.
• The Music of Freedom by 'Cuireadóir'. (Poems, The Risen Gaedheal Press, Cork 1907)
• Fianna Fáil : the Irish army : a journal for militant Ireland weekly publication edited and mainly written by MacSwiney; Cork, 11 issues, (September to December 1914)
• The Revolutionist; a play in five acts (Dublin, London: Maunsel and Company, 1914). Internet Archive.
• The Ethics of Revolt: a discussion from a Catholic point of view as to when it becomes lawful to rise in revolt against the Civil Power by Toirdhealbhach Mac Suibhne (pamphlet, 1918)
• Battle-cries (Poems, 1918)
• Principles of Freedom (Dublin: The Talbot Press, 1921)
• Despite Fools' Laughter; poems by Terence MacSwiney. Edited by B. G. MacCarthy (Dublin: M. H. Gill and Son, 1944)
Quotes
• "It is not those who can inflict the most, but those that can suffer the most who will prevail”
• "I am confident that my death will do more to smash the British Empire than my release." (On his hunger strike)
• "I want you to bear witness that I die as a Soldier of the Irish Republic." His last words to a visiting priest.

Mac Swiney clan background.
In Ireland the Mac Sweeney or Clann Suibhne were primarily engaged as professional captains or Galloglass or Galloglaigh from (1200-1600). Galloglass (g. Galloglaigh), are defined as a class of elite mercenary warriors, principally members of the Norse – Gaelic Clans of Scotland, between the mid thirteenth and late sixteenth centuries. In Donegal the MacSwineys divided into three Branches, MacSuibhne Fanad, Mac Suibhne na dTuath and Mac Suibhne Banaghin. Their services as Galloglass were much in demand from both Irish Chieftains and indeed Anglo Norman families. In a document compiled in 1602 by Sir George Carew, Lord President of Munster, it records that an Edmund MacSwiney was ‘drawn out of Ulster’ by Cormac MacCarthy, the builder of Blarney Castle, who died in 1494. This was the likely commencement of a migratory move South by the Mac Swineys whose role it was to train men in the skills of warfare and lead them in battle. They were also in demand as custodians of castles and in return for their services received rents, cattle and in time also acquired lands. This association with the MacCarthys in Muskerry lasted into the seventeenth century. In 1570 it is recorded the MacSwineys are fighting on the side of James Fitzmaurice (Fitzgerald) when the then Viceroy, the Earl of Sydney, reports that he is moving against the MacSwiney Galloglasses ‘who supply the chief forces of the traitor’. The MacSwineys are linked with a MacCarthy castle at Castlemore, near Farnanes, and held castles held in their own right at Clodagh (Cloghda) near Crookstown and Mashanaglass near Macroom. The ‘castles’ at Clodagh and Mashanaglass were built in the period (1400a.d. to 1600a.d) and could more accurately be described as ‘tower houses’. Both castles, especially Mashanaglass, are in advanced stages of disrepair and decay. In 1598 a Brian MacSwiney and his wife Honora Fitzgerald are recorded as occupiers and owners of Clodah castle (towerhouse) where a stone upper-floor mantelpiece has the inscription ‘Anno Dni. 1598 B.M.S.O.G. Decimo Die Julii’ . In 1610 this Brian is applying for a re-grant of the Castle but it was awarded to an Edward Southworthe. In 1834 (Tithe Applotment Book) the castle is held by the Earl of Bandon and probably used as a hunting lodge.
When Cromwell invaded Ireland his armies over-ran Muskerry and the lands and possessions of the MacSwineys were seized and given to Cromwell’s followers. Many of the MacSwineys lived on in Muskerry and from one of these, and descendent of the last owner of Clodagh Castle came John MacSwiney, Terence’s father “ He was born in a small farm-house near Crookstown, in the year 1835-just before the famine. While still a young man he shook of his restricted surroundings and made his way to Rome, in order to serve in the Papal Guard during the war against Garibaldi. He arrived in Rome too late the fighting was already over. On his way home, in 1870 he obtained work in London, as a school teacher. A year later he married another school-teacher, Miss Mary Wilkinson. Her father was English, or partly so, her mother’s family had emigrated from the South of Ireland two or three generations earlier. The first three Mac Swiney Children, Mary, Catherine and Peter were born in London, later on the family moved back to Cork where Terence, Margaret, Annie and Sean were born. Following the failure of a business venture with his brother in law John Mac Swiney went to Australia in search of work where he had relations and where he died in 1895. This placed a heavy burden on Mrs Mary Mac Swiney to rear her family and Terence left secondary school at age sixteen to work in the office of Dwyer and Company on WashingtonStreet. (Return to Dates sheet). 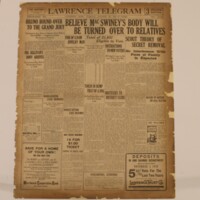 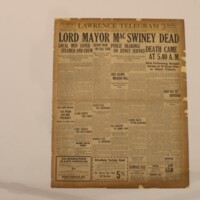 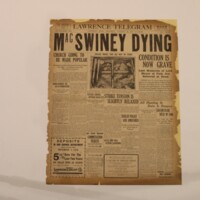 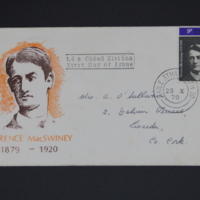 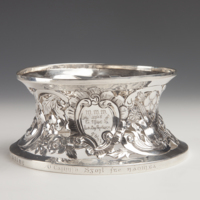 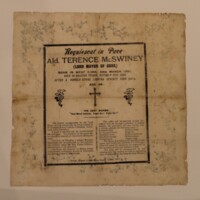 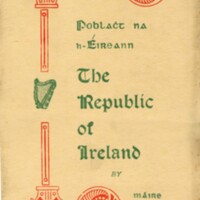